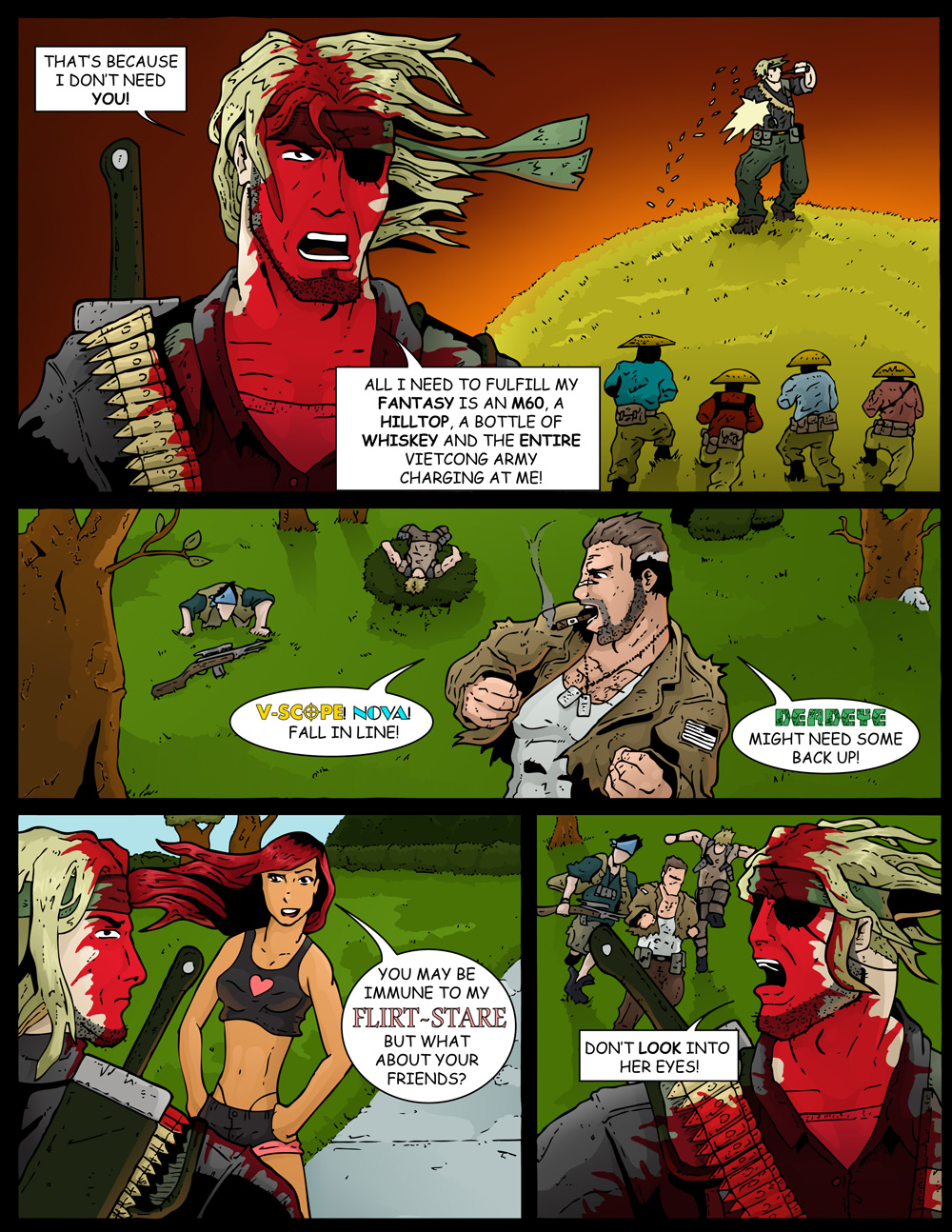 It is good to be back! So sorry for the late post, I got held up at the day job but I am back and so is Team Stryker! For all of those wondering Vancouver was wonderful and Sabrina and I had an amazing trip. I have been itching to get back to my baby that is Team Stryker however so lets jump right into it! Here is a quick recap for those pages that were posted during my vacation:

Page 08: This is easily one of my favorite pages of the entire issue. I wasn’t sure if I was going to be able to pull off Deadeye cutting a ninja in half but I’m happy with the result. The line “I hate ninjas” came from my fascination with how everyone seems to love ninjas. They are like the Japanese version of zombies it seems. I figured if there was one person in the world who would hate ninjas it would be Deadeye.

Page 09: This was a fun page to do because I was able to showcase how Eagleheart, Casanova and V-Scope all react to getting hit by an explosion that would destroy a large tank. Eagleheart compares it to a different explosion (he has seen many in his day), Casanova lands softly on a bush, and V is more concerned with the color of Deadeye’s skin than any vital injuries he may have suffered.

Page 10: Getting the blood effect on Deadeye took some trial and error as I didn’t want him to just be one solid color but instead feel like he had just been hit by a bucket of red paint. The name She-Cann came from a friend of mine who saw my comic in its VERY early stages back in 2008 and demanded that she get a character named after her. When I found out her last name was Cann it was like the heavens opened up and an angel handed me the name She-Cann. The phrase She-Cann…but she won’t instantly came to mind and the rest is Team Stryker history.

Now for today’s page: For those of you who are unfamiliar with Deadeye, he has done 100 tours of Vietnam starting in the 1960’s during the Vietnam Conflict. Deadeye continued going back even after America had pulled out. No one told Deadeye that the conflict was over so he continued to wage war on the Vietcong Army. His desire for battle is matched only by his desire for good whiskey.

Hope everyone has a great start to the week and I will be back here on Thursday to bring you more of that Team Stryker goodness you just can’t seem to get enough of.